What is your behavior in the elevator? - pariz elevator company 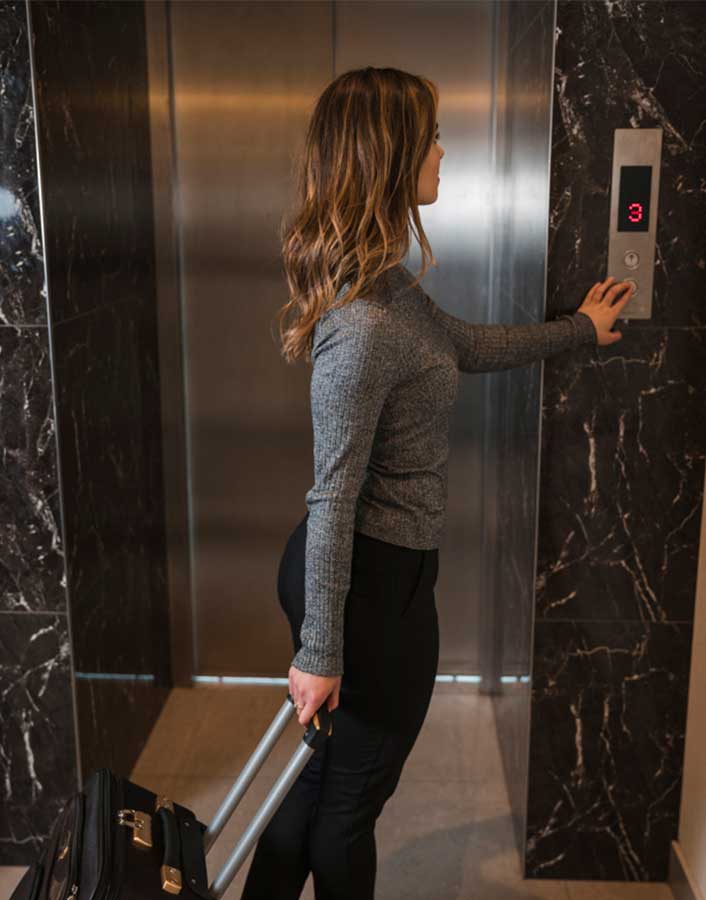 What is your behavior in the elevator?

You’re getting caught up in the elevator next to other people, and you do not know how to behave in a few seconds?
Millions of people use the elevator every day. Maybe you will be on the elevator twice in the first day. In the United States, every day, 30 million people are displaced in 58 thousand elevators in New York. It may seem a bit unusual to share moments in a small space with others. In this situation, we often try to ignore another presence in this space and keep silent, which, of course, seems to be radically instinctive behavior. Enclosing a space with strangers can make them nervous and tense, so most people unconsciously do things to reduce the contrast, for example, they do not make eye contact. It is true that the average number of people in the elevator per day is less than 2 minutes, but in this short period of time, the behavior of each of us in such an environment gives us a lot of things. It’s better to review 10 behaviors that are more likely to occur in the elevator, and to continue to read some of the strange behaviors that occur in the elevator.
۱ Do not go with your mobile!
Is there really an antenna mobile?
Interestingly, it often does not antenna in the mobile elevator. Sometimes people want to say that they are important people and their head is busy and if you have a conversation, you should not be upset. This activity is a reaction to a relaxed state of stress.

۲ Do not breastfeed!
Do not you think that standing up with your hands will feel better?
This form of standing up to the chest is a kind of frontier against those in the elevator. While the little ones are open, they show a good feel for the other people. But holding a chest shows that the person does not want any verbal communication in the elevator.

۳ Do not go with the keyboard!
Does not this show anxiety too much?
It’s one of the oldest ways to distract you with the contents of a bag or newspaper leaflet. By doing so, the person wants to create a wall between himself and others. This condition displays a kind of neurological response. In fact, the person wants to calm himself down.

۴ Do not talk to you!
Why do you list all the things you need to do?
Talking with yourself is a movement with which the person browses all his day, what he has done, what he has done, and … people who talk to themselves tend to gaze at their shoes and refrain from eye contact. They transmit the message that is not a threat to others.

۵ Do not swallow a cane!
In this case, it’s better to be close friends
Some people raise their heads, pull their shoulders back and place their legs flat. In the term, these people are gobbled up. They are basically called self-conscious people. These people are the same when they are the lifts.

۶ Get your hands out of the dagger!
This mode is a kind of hiding stress
This usually happens among gentlemen because they often wear lace pants. In this case, the person induces an insecurity, even if it is not. When the two men are in the opposite position, while one of them is in his pocket, the person tells herself not to pull out a dangerous device from his pocket!

۷ Do not hang around!
In this case, the person shows himself vulnerable
Some people unknowingly shake their hands in the elevator. This mode allows others to assemble themselves and to somehow be in a state of contraction that provokes this vulnerability message. In this situation, many people keep their work sheets or bags in front of them.
۸ Do not push!
If he takes the door in this situation, he will go out sooner?
Such people make the message that they should be the first to leave the elevator when they open it. This state of affairs represents an attitude towards the surrounding. An individual who thinks his hand on the elevator with his own mind thinks he can get out sooner if he takes this into shape.

۹ Do not stop!
That’s how one cares
Some people stay straight and straight ahead, like the children’s song hymn! They want to distance themselves from others and be close enough to exit as they are opened, as if the guards are in front of the elevator.

۱۰ Do not rely on!
There is no need to use any special energy
Those who rely on are often people living or working on the floor of the building. They are very calm and do not want to be involved. This way, they show that they are tired or do not need to control their energy.

Please use the widgets to place the required tools.